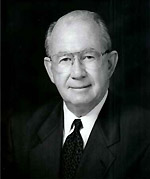 Glendon B. Craig was the commissioner of the California Highway Patrol from 1975 until 1983. He was thanked in the credits of every episode of "CHiPs" except for the final episode.

Glen Craig is a veteran of 44 years in Law Enforcement having served with four different departments at both the state and local level. He began his career with the Visalia, CA, Police Department in 1955 upon his discharge from the United States Army. In 1956 he joined the California Highway Patrol and progressed through the ranks to become the Commissioner in 1975 and served until 1983. During this period he had assignments in Victorville, Visalia, Eureka, Gold Run, Los Angeles and Sacramento. In 1983 he was appointed Director of the Division of Law Enforcement at the State Department of Justice. He was elected Sheriff of Sacramento County in 1986 where he served three terms and retired in 1999. He has since been working in the private sector on Law Enforcement related issues.

biography from California Commission on the Fair Administration of Justice