Difference between revisions of "Flashback!" 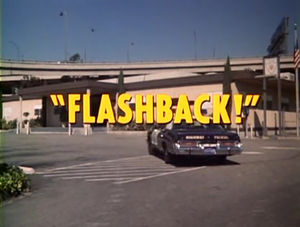 A brash rookie patrolman causes Ponch to look back on his days as a push-the-limits, know-it-all newbie.

While a police motorcycle is being stolen outside a restaurant, Ponch beats Jon at the tight maneuver drill at Central. As the winner of the bet, Jon has to take Ponch to lunch at Marinino's, an Italian restaurant apparently popular with police officers.

After the theme, Ponch agrees to try the tight maneuver drill with Officer Brent Delaney. As Brent gets his helmet, Ponch has a flashback to working in a garage with his friend Henry. After Brent beats Ponch at the drill, Brent admits he graduated from motor school last Friday. Ponch is surprised that he's just two days out of motor school.

At the briefing, Ponch has a flashback to getting chewed out by Getraer at his first briefing. At the present-day briefing, Baricza tells Ponch and Jon that Brent is Senator Delaney's son. Senator Delaney is the chairman of the highways committee in Sacramento. During the briefing, Getraer informs people that the LAPD has lost three motorcycles and the sheriff's department has lost two. Just in case, he tells the officers that the form number for a missing bike is number D12-51 and "the 'D' stands for 'disgrace'." After the briefing, Baker and Poncherello are assigned to alternate being partners with Delaney for a few weeks. Neither Ponch nor Jon seem pleased.

Outside, Jon has a flashback to driving in a cruiser and responding to a dirt bike call. The dirt biker turns out to be Ponch. After Ponch jumps over the cruiser with his dirt bike, Jon chases Ponch down a dirt road. Ponch rides into a ditch and falls off the dirt bike. Jon asks for his license and suggests he wear a helmet in the future.

Back in the present, a hitchhiker headed for UCLA gets picked up on the side of the freeway. After Ponch and Brent spot the car exiting the freeway over the grass, they pull it over. While Brent talks with the driver that Ponch handcuffed instead of watching the passenger, the hitchhiker runs away. Ponch runs across the road, catches him with help from Baricza, and searches the car. He finds a gun. Brent lets the driver go without citing him for a violation.

After the situation is resolved, Ponch has a flashback to dirt bike riding with Jon. We learn that Ponch taught Jon how to ride and that Jon gave Ponch his application for the CHP.

Back in the present at Central, Ponch tries to cover for Delaney with Getraer even though Baricza's report contradicts it. In the locker room, Grossie and Baricza blame Delaney for his mistake and he gets upset. Ponch has another flashback to crashing on his 8th day as an officer after hitting an oil slick. While the motorcycle is being towed away, Ponch fears that he'll be put back in a patrol car. As they're about to leave, a car drives through the back of a garage and into a swimming pool. Ponch takes action. He jumps in with Jon and helps save the two occupants from the submerged vehicle.

On his way home in the rain, Brent finds a screaming woman who says someone needs help. He runs off looking for the trouble and gets his motor stolen while he's gone. The next morning, he drives his Mercedes to Central.

As he walks into Central, Jon flashes back to when Ponch meets Getraer for the first time. Getraer looks over his application to join the CHP.

In the present, Ponch arrives at Central and Grossie tells him that Delaney's motor was stolen. This makes Ponch flash back to when a girl showed up at Central looking for "Frankie" causing Getraer to express his frustration with Poncherello to Jon.

In the present, Delaney arrives in the briefing room only to get made fun of by other officers.

In yet another flashback, Ponch is riding in a car with his friends who are drinking and littering. They end up being chased by Jon in his cruiser. When Jon corners them, they get out and face him 5 to 1. Ponch gets out and manages to make it a friendly encounter by pretending that Jon is his cousin.

After the second briefing, Ponch volunteers to take Delaney out with him again. On patrol, Delaney and Ponch spot the woman who set him up and go after them. After Ponch arrests the first two, they are joined by Baricza and Jon. Delaney, Jon, and Ponch corner the final thief.

That night, they find the storage area for all the stolen motors and everyone compliments Delaney. Apparently unable to live up to everyone's expectations, he is never seen again.

"Look, this is the CHP, not The Dating Game!"