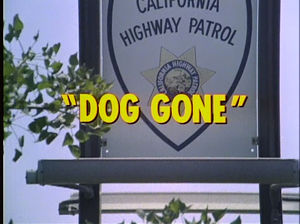 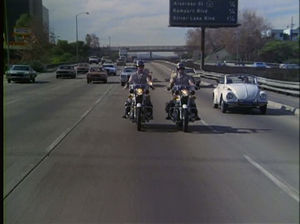 As the episode opens, Jon and Ponch attempt to catch a dog that was running in the middle of the freeway. It gets away and causes an accident on an overpass involving a dune buggy. Feeling sorry for the dog, Jon has Baricza bring it to headquarters.

When they get back to Central, Getraer is upset with Jon for having the dog brought back to headquarters. Jon explains that he wants to bring the dog to the vet down the street to get his paw healed.

Out on the highway, Ponch and Jon chase a guy on a motorcycle who has frozen up. They need to stop him before he gets to a traffic jam up ahead. After they stop him, he wanders off muttering how he never wants to ride it again. 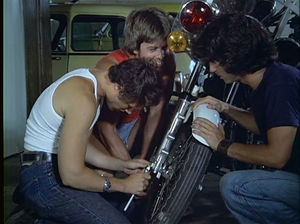 The guys from the dune buggy loosen a hub

At headquarters, Getraer tells Jon that the dog checked out okay with the vet and insists they take him. After leaving, Ponch and Jon split up. Jon goes home but is followed by the guys in a dune buggy because they think it's Ponch. While Jon attempts to hide Fido's presence in his apartment building, the guys from the dune buggy try to get revenge on the officer they think is Ponch by loosening one of the hubs on Jon's motor. 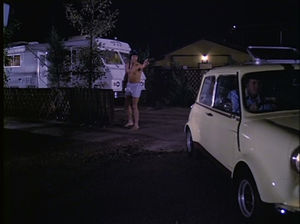 Jon abandons Ponch with the dog

That night, Jon brings Fido over to Ponch's motor home. After eating one of Ponch's Ding Dongs, Fido warms up to Ponch a bit. Jon runs off quickly leaving the pair alone.

The next day, Jon discovers that Ponch brought Fido back to Central. When they spot Getraer, Ponch hides Fido in Baricza's cruiser just before he drives off. 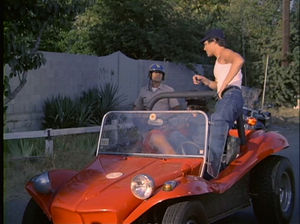 Out on the streets, the dune buggy guys are caught following Ponch and Jon. They are warned to stop following them. After giving a ticket, Ponch and Jon chase down a speeding car with a heart attack victim. The driver refuses to stop. Ponch calls in for an ambulance on the San Diego Freeway. After getting the car to pull over, they help save him just before an ambulance arrives. The woman says she was trying to get her husband to Valley Presbyterian Hospital, but Jon tells her that the hospital is near Sherman Way and she took the wrong off ramp. As they're getting ready to leave, Baricza drives up with Fido. 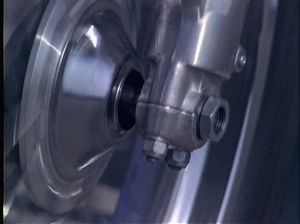 One of many shots of the loose hub

At Central, Zero, one of the dune buggy guys, confesses what he and his friends Boots and Little John did to what they thought was Ponch's motorcycle. Meanwhile, Fritz calls in a request for assistance in chasing down some bank robbers. Jon and Ponch respond. When Getraer finds out what the dune buggy guys did, he warns Ponch. After Zero comments about being at an apartment, Getraer realizes that it's Jon's front hub that was loosened and sends Ponch after him. Jon manages to pull over but falls off the motorcycle as it comes to a stop. Luckily, he's not even bruised. 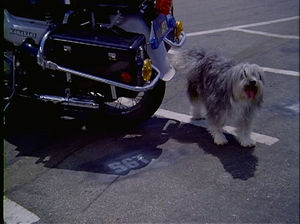 Fido relaxes after a busy day

At Central, Getraer has Barkley take Zero down to get booked and then calls Baker and Poncherello into his office. The dog's owner and his son are there looking for the dog. Ponch gets him out of a truck and the dog proceeds to relieve itself on Sarge's motorcycle. Laughter follows as the credits roll. 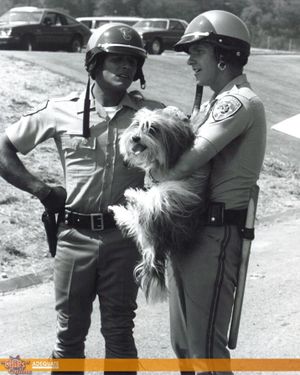 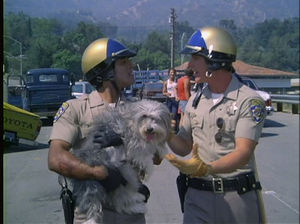 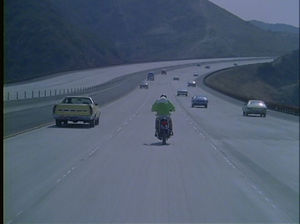 No cars headed in the opposite direction?