Difference between revisions of "Disaster Squad" 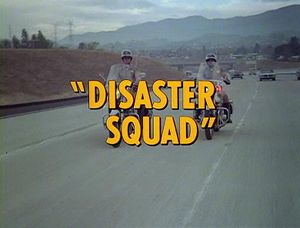 While Ponch and Grossie check out and rate women on the freeway, an old guy is driving recklessly in a truck on the Ventura Freeway. As Ponch and Jon chase him, he hits a car and rolls over. As Jon tries to calm the guy down, the Channel 3 news crew (aka the "Disaster Squad") shows up and provokes the guy. He climbs onto an overpass and the news crew try to get the guy to jump. Ponch turns around to confront someone from the news crew. The crew member takes a step back and falls over. After helping him up, Ponch says, "It's a crime to assist a suicide, creep. Now you keep your mouth shut or I'll have you in the slammer." When the crazed man's boss shows up, they make up, hug, and everything turns out fine. 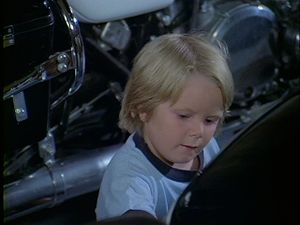 Watch out, Harlan, this kid wants your job

Back at the Central garage, Ponch and Jon meet a lost kid named Chris. Fritz drives him home in a cruiser while Jon and Ponch follow. At his house, Chris shows them his mini-motorbike. While Ponch, Jon, and Chris's mom watch him ride it, Jon hits on Chris's divorced mom.

At the briefing, Getraer encourages courtesy. Ponch brings up the "Disaster Squad" and that they make it hard to go "by the book".

After the briefing and out on the freeway, Jon reveals that he wants to date Chris's mom, Ellen, while Ponch rides motorcycles with Chris. Ponch gives Jon a hard time and says he'd rather take a date to a baseball game. As he talks about it, a call comes in for a driver going the wrong way on the Ventura Freeway. They find the truck and realize he's driving in reverse. It distracts a van and causes an accident. While Jon writes the ticket, the "Disaster Squad" reporter kicks a flare into a gas puddle and causes an explosion. The cameraman's shirt catches fire and Jon and Ponch rush to put it out.

Back on patrol, Jon and Ponch are pulled over by Sindy. Her "boyfriend" Chris is in her backseat. Ponch and Jon bring him home again. While Ponch rides with Chris, Jon has a picnic with Ellen. Ponch suggests that Chris enter a race.

Soon we see Chris in a pee-wee motocross race. Just before he's about to win, "Bobby" knocks him over. Chris is mad and wants to punch him. Ponch tells him it's not nice to punch people.

Meanwhile, Chris is home watching the news. He sees Regis Philbin's fake Channel 3 news report on Ponch saying, "I'll slam you in the mouth creep!" Chris becomes confused and distraught. He decides to run away, not knowing the report was actually forged by fancy editing.

At Central, Getraer is upset with Ponch. Ponch claims it never happened, the film was run backwards, and the sound was doctored. Getraer calls it a tall tale, but believes him. A calls comes in from Ellen telling them that Chris ran away. Sindy puts out an APB while Jon and Ponch head out to find him.

Fritz finds Chris near the flood control channels. When Chris rides his motorbike too close, he falls in. Ponch and Jon try to rescue him, but can't reach. When Ponch tries again, he falls in. Jon tries again in another minute by throwing them a hose. They're all pulled to safety moments before the Disaster Squad arrives. The reporter tries to get a story, but his crew turns the tables and makes him confess as to how he faked everything.

At the motocross track, Ponch makes Chris swear never to ride alone. While they ride together, Ellen tells Jon that her ex-husband wrote to her and wanted to get married again. She clarifies that he wanted to marry her again. Jon says it would be good for Chris to have someone around so he can ride more often and asks if she's going to marry him. She says no and Jon smiles.

"A fist fight never proved nothin' except you're dumb. You know that?"
-Ponch 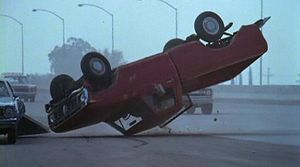 The jump ramp used for the stunt can be seen.