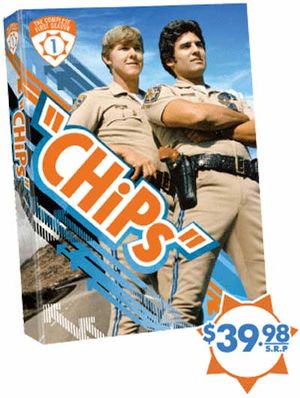 DVDs are currently available of the first, second, third, fourth, and fifth seasons of "CHiPs" with the sixth season due in June 2017.

It was announced on February 7, 2007 that a DVD box set of the first season of "CHiPs" would be made available June 5, 2007. The DVDs are official products from Warner Bros.. "CHiPs": The Complete First Season DVDs include all 22 episodes of season one with introductions by Erik Estrada on select episodes and a CHiPs: The Ride Out of Spanish Harlem featurette.

"CHiPs": The Complete Series will become available on June 6, 2017.

Due to the previous lack of official DVDs, there have been numerous bootleg DVDs (in some cases, all over the world). Such bootlegs can have issues with disc and picture quality.

Bootleg DVDs often show up on eBay and elsewhere. Fans are cautioned that these are illegal! The footage on the DVDs was likely recorded off TV and is undoubtedly low quality. Fans are urged not to buy these.

The fact they are region-free is a big clue to these being bootlegs, not to mention the horrible DVD cover art.

This DVD set has also shown up on several other sites (which is very likely the same bootlegger operating several storefronts since the exact same FAQ appears on some of these sites). Some of these sites use the following description:

A light-weight action crime drama (that played as more of a comedy in some episodes, particularly in the first season) created by Rick Rosner, it starred Erik Estrada as macho, rambunctious Officer Francis ("Frank") Leonidas (as translated in France) "Ponch" Poncherello and Larry Wilcox as his straight-laced partner, Officer Jonathan "Jon" Baker. With Ponch the more swarthy, trouble-prone of the pair, and Jon generally the more level-headed one trying to keep him out of trouble with the duo's gruff yet fatherly commanding officer Sergeant Joseph Getraer (Robert Pine), the two were Highway Patrolmen of the Central Los Angeles office of the California Highway Patrol (CHP, hence the name "CHiPs").

The odd mention of Ponch's name in France is another clue that this is a bootleg and the content is not to be trusted. One site claims that TV shows unreleased in the United States are in the public domain, but this is blatantly false! 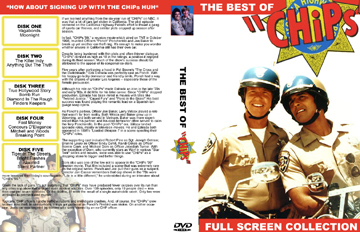 One DVD set that has shown up multiple times is sold by a company called Empirical (or Empirical Film). The company sells DVD sets of many television shows, many of which are already legally available on DVD. The company is based in the Philippines, making it difficult for license holders to shut them down.

Clues that this is a bootleg are:

Unfortunately, the text description is too small to read, but it was likely taken from CHiPs Online. 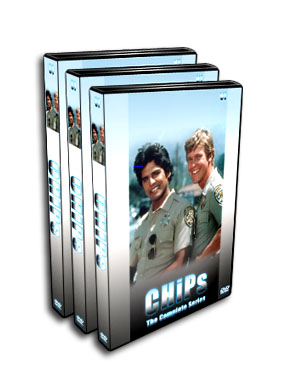 Another set of bootleg DVDs

Cover art for these bootlegs

Although the producers of this DVD set aren't named (which in itself is a clue they're bootlegs), they have been found on sites called "TV Addicts" and "TVMediaStar", so those are the names that fans have used to referred to this set. TV Addicts claims to have 139 episodes on 15 DVD-R discs. (That's about nine hours per disc, so the quality must be terrible!) TVMediaStar shows the same image, but claims 139 episodes on 22 DVDs.

Clues that these DVDs are bootlegs are:

TVMediaStar was charging $79.95 for this rip-off.

Unfortunately, the text description is too small to read, but it was likely taken from CHiPs Online. 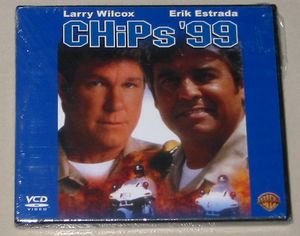 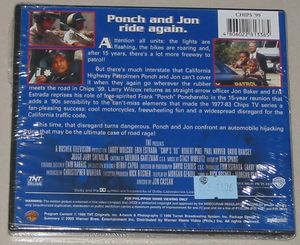 This may look like a legitimate Philippine release of CHiPs '99 on VideoCD by Warner Bros., but it is not. The bootleggers have apparently just taken the VHS release, copied information from the box, and put it on a VideoCD. Please note that this is not a DVD and VideoCD quality is very poor.

Clues that this VCD is a bootleg are: