Difference between revisions of "Crash Diet" 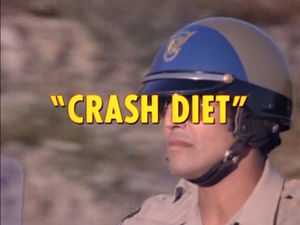 One kind of loser: A man hurls debris at traffic. Other kinds of losers: Some CHPers must shed weight.

Right after Ponch predicts that something strange is about to happen, someone runs onto the highway and throws a ball of dirt at him. Ponch and Jon pull over and Ponch chases up a hill after the man, but loses him. As they're about to get going, a van full of naked female volleyball players drives by. Ponch and Jon chase the speeding van to a nudist colony. As the naked players exit the van, Ponch and Jon just stare into each other's eyes while smirking. They give the driver a ticket for speeding and failure to yield.

That night, the dirt thrower is at it again and nearly causes an accident.

At the morning briefing the next day, Getraer tells everyone about the dirt thrower in that Topanga area. Next, he tells everyone that the Central division of the CHP has to lose 1,000 pounds as part of a "comprehensive physical conditioning program". He hands out computerized printouts for individual weight loss, starting with Hunter.

After the briefing, Ponch and Jon hit the bricks. Ahead of them on the freeway, a student driver is the next victim of the dirt thrower. The driver panics and ends up driving up a hill and back down onto the road. Ponch and Jon arrive right after it happens.

Back at Central, Grossman weighs in at 209 and shows Getraer photos of himself in high school, in the service, and just before he got married to prove he has always been overweight. Getraer insists he has to lose 18 pounds. In order to help out Grossman, Ponch suggests that they each lose an extra five pounds to help out Grossman.

Ponch and Jon go out looking for the dirt thrower. They don't find him but return to dirt covered motorcycles.

Back on the highway, Ponch spots an explosives truck on fire driving down the freeway. After the truck stops, the driver opens the back and causes the flames to flare up. Ponch holds the driver still while Jon drives the truck away from all the cars. Ponch gets a bystander to hold the driver while he follows the truck and gives Jon a ride away. Just as they get a few hundred feet away, the truck explodes and knocks them over.

At Central, Grossie is trying to do sit-ups. He gets to three.

Ponch and Grossie go to dinner that night. Ponch has pizza while Grossie has a salad. While Grossie gets the check, Ponch aids someone who's choking by karate chopping him on the back. Someone thinks Ponch is attacking the man and it triggers a brief fight until Grossie gets people under control. Ponch saves the man with the Heimlich Method.

Later that night, Ponch and Jon are staked out in Jon's little car looking for the dirt thrower. After talking to him for a minute and learning his name is Leonard, he runs off.

Bright and early the next morning, Ponch and Jon meet up with Getraer and Grossman to go jogging. Along the jogging route, Ponch and Jon find the women's volleyball team from earlier, fully clothed this time. They join them for a game.

That morning at Central, a doctor from the VA hospital explains that Leonard is a part time patient and hates cars because he was recovering from a Vietnam head wound when his wife was killed on the freeway.

The doctor joins Ponch and Jon out at Leonard's hiding spot. He hugs the doctor, but runs into traffic after spotting the CHP officers. They chase after him and put handcuffs on him.

At the final weigh-in, Hunter has lost 7 pounds, Grossman has lost 8 pounds, Jon's down to 175, Ponch is down to 180, and the CHP makes their 1000 pound weight loss goal. When Ponch, Jon, and Grossie ask Getraer to be weighed again, Grossie slips a weight on the scale so that it appears Sarge gained ten pounds and was up from 179 to 189. He gets all confused.

"I never ordered any moonlight monkeyshines and you know it!"
-Getraer