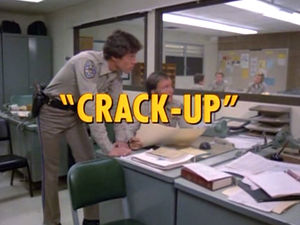 Uneasy rider: Ponch must partner with Sgt. Getraer after Jon is injured in an accident.

On the highway, Jon tries to remember why he loaned Ponch $20. As they enter the city streets, two cars speed by and they pursue them. The speeders split up and the Trans Am turns down a side street and tries to turn around. As he is sideways, Jon hits the car and flies over the hood. The speeder takes off on foot as Ponch arrives at the scene of the accident to find Jon in pain.

Jon arrives at the hospital and Getraer meets him there. Out at Al's Garage, the Trans Am's driver arrives and tells his buddy that he ditched the car and then reported it stolen. He figures that as long as his buddy sticks to the story that they were together, he'll be in the clear. He blames the cops for messing things up his whole life and vows to get even.

At the hospital, Ponch, Getraer, and Baricza wait for news at the hospital. The doctor says that Jon is stable but they don't know what's wrong. Jon insists he's fine. When Ponch and Getraer try to leave, Jon gets up and gets dizzy.

Outside the hospital, Ponch learns that Getraer will be his partner for a while. As they leave the hospital, they head in opposite directions. Ponch turns around and Getraer tells Ponch they'll head to the Hollywood Freeway south, Vermont on ramp.

Inside the hospital, Jon gets a visit from a woman named Wanda Lang who makes him laugh and wince with pain when he does.

Meanwhile, one of the speeders takes the garage's tow truck, loosens the tow chain, and gets Grossman to chase him. He drives down an alley, turns around, and manages to smash Grossman's windshield and knock him off his motorcycle. Grossman ends up as Jon's roommate. Ponch suspects that it's more than a coincidence that both Jon and Grossman ended up in the hospital and Getraer agrees.

Back inside the hospital, Wanda stops by to meet Grossman and entertains him and Jon with a few jokes. When a good looking nurse offers Grossman a rub-down, he's excited...until he finds out that it will be given by a large man named Hugo.

Elsewhere, a man argues with his wife and takes off in the family station wagon. As he enters the Santa Monica Freeway, he pulls in front of Ponch and Getraer. The man's daughter in the station wagon begs for him to stop, but he keeps going. Ponch speeds in front of the car to get the man to slow down. They arrest the man and turn him over to Baricza. While Baricza takes the family, Getraer scolds Ponch for pulling such a "hot dog stunt" and believes that Jon covers up a lot.

When Ponch and Getraer go to visit Jon and Grossie, Jon is undergoing hypnosis...but Ponch snaps him out of it by saying "Hi." When Ponch leaves, Jon asks for a uniform and a motor while Grossie could use some Fig Newtons.

At Central, Getraer brings everyone up to date with the attacker during the briefing.

At the hospital, Wanda drops by to see Jon and Grossie again. Jon tells her that they know her husband's not doing well. He gets her to open up to him and admit that she's scared. Jon and Grossman encourage her to keep making people laugh.

Meanwhile, the speeder heads out on the freeway and almost sideswipes Ponch. Ponch and Getraer chase him as he pulls off the freeway. As he turns a corner, Ponch pulls in front of Getraer to keep him from turning. Ponch realized that Sarge was being set up the same way Jon was.

At the hospital, Jon's being released. He says goodbye to Grossie and Wanda. Wanda tells him that she and her husband will be performing at hospitals, jails, and "anywhere that they can't escape."

The next day, Ponch and Jon encounter an overturned armored truck. The guards refuse to leave the truck. While directing traffic, a tow truck goes flying by. Jon recognizes the driver and chases him with Ponch. After exiting the freeway, they split up and Ponch follows it down an alley and is almost hit the same way Grossie was. After backing up near a pole, Jon secures the chain to the pole. Jon is glad to finally arrest the driver and remembers Ponch needed the $20 for two tickets to the Lakers game.

Back at the armored truck and over an hour later, the truck is still on its side. Getraer tells Ponch it should have been handled "by the book". Ponch asks Getraer to cite "chapter and verse from the book" when the guards still refuse to leave the truck.

"It's a jungle out there, pal."
-Grossman 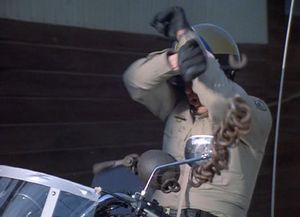 Grossman is hit by broken piece of chain. 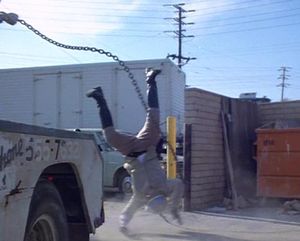 A wire and harness are used to pull the stuntman from the motorcycle. 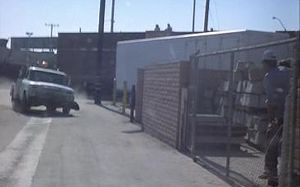 Crew member in the shot