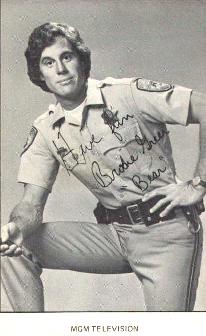 Brodie Greer (Officer Barry Baricza) was born on October 26, 1949 at St. Vincent's Hospital in Santa Monica, CA to Bill and Dayl Greer. He has brothers Bill Junior, Patrick, and Greg and a sister Treacy.

He has appeared in several small roles since leaving "CHiPs" at the end of the fifth season. He is currently a real estate agent in California.