Difference between revisions of "Baby Food"

It should be labeled with a skull and bones. A trucker's missing cargo of baby food is tainted with botulism.

Ponch and Jon perform in the highway steeplechase event

Headed back to Central on the Golden State Freeway, Ponch is daydreaming about a beautiful new neighbor in his trailer park. As they ride down the highway, the back of a truck opens up and boxes begin to fall out onto the road. Jon pulls in front of the truck and makes the driver pull over. Fritz arrives and takes over the cleanup while Ponch and Jon head off to Central to wait for a court call.

Back at Central, everyone else is in the briefing and Ponch makes faces and mocks Getraer in the door's window. Getraer asks him to stop, but it's not long before he's flirting with a woman in the briefing room doorway.

Getraer is not a fan of The Troubled World

Out on the road, the young couple with the bus finds a box of baby food on the side of the road. Meanwhile, Ponch decides to watch a soap opera called The Troubled World on the TV in the briefing room. Irritated by the noise, Getraer turns off the TV.

Elsewhere, the baby food truck is being unloaded and the driver tells his supervisor that he's two boxes short. His supervisor goes inside to call the CHP. Back at Central, Ponch is telling tall tales to a room full of women when Getraer walks in. Annoyed by Ponch's constant distractions, he tells them to leave. Ponch decides that they'll stand by at his place where they will still be available by phone...and where Jon can get to see Melinda, his new neighbor.

On their way to Ponch's trailer park, they're discussing how to approach Melinda (including doing Sylvester Stallone impersonations) when they encounter a car fire. Ponch keeps the driver under control while Jon saves a barking dog named Randy. Jon gets the dog out of the car just moments before it explodes. Baricza arrives and is relieved to find everyone safe, but amused that Ponch got covered in black soot while Jon stayed perfectly clean.

Ponch's maid must be on vacation

At Ponch's motor home, Ponch changes his shirt while they discuss how to approach his new neighbor, Melinda. When he spots her out the window, he accidentally knocks his phone off the hook.

Getraer gets a call at Central about the baby food contaminated with botulism. After issuing an APB, he realizes that he should check with Baker and Poncherello, but his attempts to contact them by phone just gets busy signals. Fed up, Getraer brushes off Barkley and heads out to track down his missing motor officers. On his way, Getraer yells at a driver who passes him doing 68, but doesn't give him a citation and tells the driver to "consider yourself warned and advised!" ...because he's "such a nice guy."

When Getraer arrives at Ponch's motor home, he tracks down the phone and finds it off the hook. He threatens to put another Form 2 in Poncherello's jacket. After asking about the baby food, Jon suggests he check with Fritz since he called for Caltrans and stayed for the cleanup. Getraer orders Ponch and Jon back to Central so that they'll be where he can reach them.

As Ponch changes out of his "Keep On Truckin'" T-shirt, Melinda hits on Jon by offering him a glass of iced tea. On the way back to Central, Ponch and Jon look for the missing baby food boxes. As they leave the freeway to check the other side, they find Mrs. Downey coming up the exit ramp. Ponch helps her and turns her car around for her. Mrs. Downey gives Ponch a cookie...for Jon. 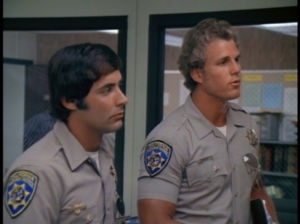 Barkley and Brouillette get their big break

While riding to Central, they remember the school bus they saw along the road. They tell Getraer about the bus which was headed south on the Golden State Freeway. An APB is sent out. Ponch suggests that they stopped to camp in the Santa Monica canyons. Getraer sends two officers to Tapanga Canyon with "some other units". Barkley is ordered to Malibu Canyon when Brouillette tells Getraer that there's an accident near the tunnel, traffic is backed up, and a motor is the only way to get up there. Getraer sends him with Ponch and Jon to check it out while Barkley just sits to write a report, left out of the action once again.

"That baby food is poison!"

On a side road, Ponch and Jon find the bus. They tell the mother that the baby food is poisoned. Ponch asks for a helicopter, but none are available. Jon asks for medical assistance and the dispatcher relays that UC Medical says the baby should have its stomach pumped immediately and anti-toxins must be administered. Due to the traffic tie-up, Jon carries the baby on his motor to an ambulance waiting at the end of the canyon road.

At the hospital, they're on the phone with Getraer and tell him that the baby will be fine and that all the missing baby food has been recovered. Getraer is relieved and commends them on a good day's work, but asks that they not use CHP phones as their personal answering service. Getraer says he has three messages from Melinda...for Baker!

"Think it over. I make a great potato salad!"
-Ponch