Peña and Estrada
Photo by @ChineseTheatres

Lead actors Dax Shepard and Michael Peña walked the blue carpet. Shepard plays “Jon Baker” and also wrote and directed the movie. Peña plays “Francis Poncherello”. Original Ponch, Erik Estrada, was among those in attendance and is the only original “CHiPs” cast member to appear in the movie. 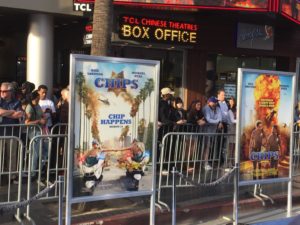 People at the CHIPS premiere
Photo by @ChineseTheatres

Based on photos posted to Twitter by @ChineseTheatres and @chipsmovie, it appears dozens of people turned up to catch a glimpse of the movie’s stars.

Despite being founded in 1995 and being the longest running “CHiPs” site on the Internet, “CHiPs” Online was not invited to the premiere. A review of the film will have to wait until a later date.